Superstar and gizmo enthusiast Shah Rukh Khan has launched an official game ahead of the release of his forthcoming movie ‘Chennai Express’.
Shah Rukh said in a statement that the movie has a vision and a theme, which a game needs to carry forward and keep the gamer immersed in. The ‘Chennai Express’ game captures the theme, the graphics and the mood of the movie brilliantly.
See Also >> 10 Best Most Played Android & iOS Games Free 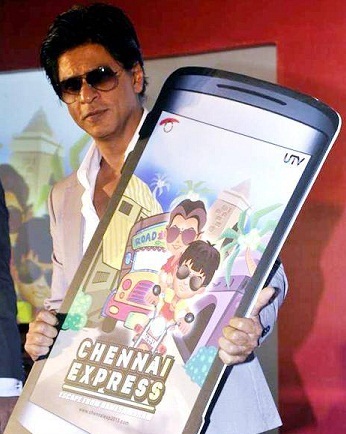 Disney UTV’s Digital arm has launched the official mobile game based on upcoming Chennai Express movie. The game is titled Chennai Express: Escape from Rameshwaram.
In the game, the player takes on the role of Rahul (Shah Rukh’s character in the movie) and embarks upon an exciting and colorful running adventure, where he fights his way through an army of thugs from Chennai while dodging obstacles like trucks, buses, cars, coconut carts, manholes and more. This is a preview game, Upcoming versions will give the player the ability to buy special power-ups and upgrades from an in-game store using collected coins, and will also feature unlimited gameplay. 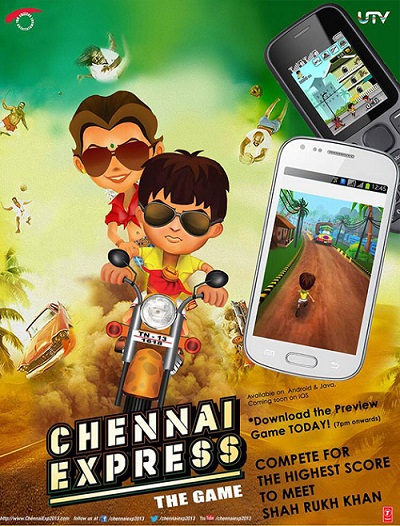 As a special bonus, gamers can unlock a special Deepika Padukone avatar, by collecting more than 10,000 coins in a single game session.
Chennai Express Movie will hit theaters worldwide on Eid – 9th August 2013. This game is available for Android and Java phone from 25th July 2013 but its iOS version released on iTunes store closer to the movie’s release on August 9, 2013.

You can play this game on PC download .APK file from Android Play Store, then play it with BluStacks.