Do you love your Android or iPhone and can’t you live without your phone? As the Smartphone market is growing month by month, we are getting addicted to their apps and games, some of the apps are amazing to use, i know, i can’t complete my sentence without the popular apps Angry Birds, Draw Something, Air Attack HD and so on, If you want to run those or any other Android or IOS app on your Mac or Windows PC, now its possible with BlueStacks.
BlueStacks now makes it possible to run latest Android and IOS applications on Mac and Windows PC for free without buying these apps for your Windows or Mac. Now it is compatible with Windows 8 also, which means you can play touch sensitive mobile games on Windows 8, Windows store has its own app store but BlueStacks supports 750,000 mobile apps for PC and Mac and run on full screen mode, which is quite amazing for latest and popular app lovers.
See Also >> How To Install & Run Windows Softwares On Mac OS X [Free Tool]
If you want to download .apk files from Google Play Market then its now possible. BlueStacks is only the way to run Android applications on Windows 8 PCs, tablets, and smartphones. While its in beta, BlueStacks does this by using a emulation of the Android Davlik (also a VM) on top of Windows not by using virtual machine (VM). Its simple to run Mobile apps on your Windows and Mac. 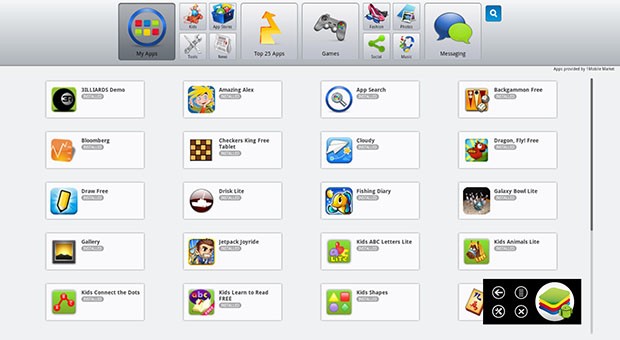 Run Mobile apps on your Windows and Mac

How To Run Mobile Apps On Windows and Mac:

1. First Download and Install BlueStacks on your Windows or Mac.

2. Search apps and install on your system.
3. If you want to run and download Android app then you need to login your google account to install apps from Google Play.
4. This way you can install Android Games & Apps on your Windows or Mac.
Do comment about this app, and which app or game you use on your system from this BlueStacks
App.