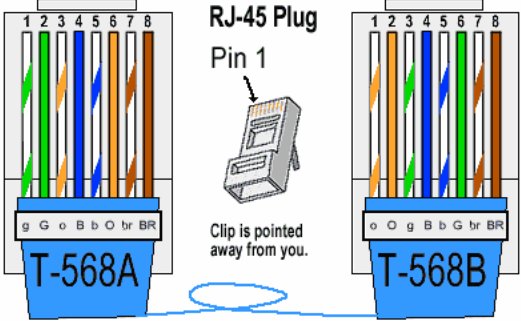 When the RJ connectors first came into use, they were primarily used for telephones. The great advances in technology created a need for another size connector and the RJ-45 was adapted to fit.
The most common twisted-pair connector is an 8-position, 8-contact (8P8C) modular plug. It is referred to as an RJ45 connector.
There are two different RJ-45 connector types available: 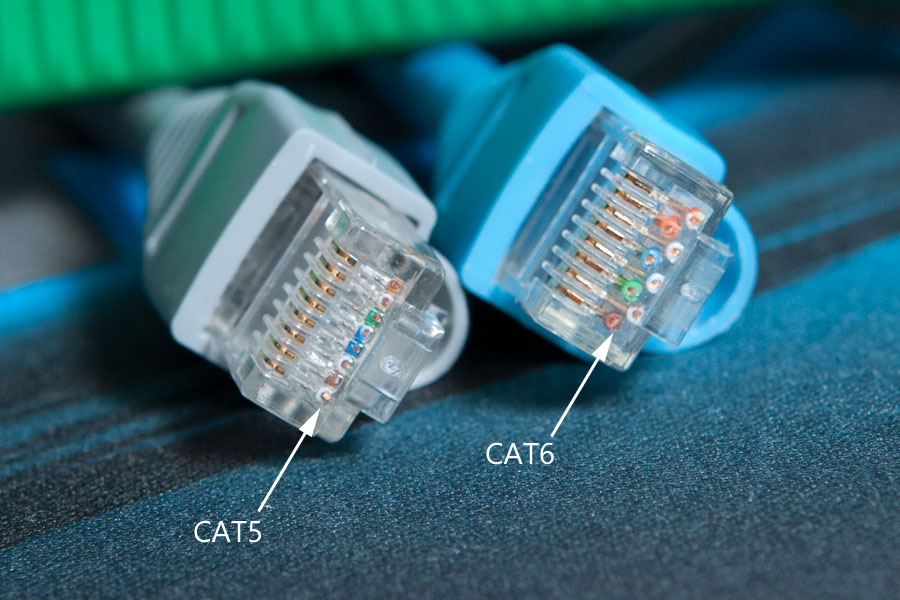 When terminating the network cable, it is necessary to arrange the colored transmission contacts in the correct order. T568A and T568B are two different standards that are used to determine the order of their arrangement. What is their difference? This topic will be covered in this article.

More about the difference between cat5 and cat6 connectors.

The EIA/TIA 568A and 568B standards are best known for two tables T568A and T568B, which describe the connection of twisted pair cable conductors with 8P8C connector pins when organizing an Ethernet network. T568A and T568B are the two color codes used for wiring RJ45 modular plugs.
The only difference between T568A and T568B is the position of the orange and green wire pairs.
The T568A wiring scheme provides backward compatibility for both one pair and two pairs of USOC wiring schemes. It is the preferred wiring pattern. The U.S. Government requires the use of the T568A wiring standard under federal contracts. But the T568B standard is more popular with users, especially for a new network. T568A and T568B are not combined or interchanged.
Network cables consist of four pairs of wires, each of which consists of a solid colored wire and a strip of the same color.
There are also two types of Color Coding for Cat 5e and Cat 6 (Crimping RJ-45):

What are straight through and cross cables?

What is a straight through cable?

Straight through cable is one of the types of twisted pair cable that is used in local networks to connect a computer to a hub, a router, or a switch. This type of cable is often also called an Ethernet Patch Cord, it is used as an alternative to a wireless connection.

In a straight through cable, the contacts of the wires correspond to the contacts on the other side. In a straight through cable, one standard for the arrangement of wires is used – either the T568A or T568B standard is used at both ends of the cable. Below is a diagram of a straight cable in which the transmission contacts at both ends of the wire are located in accordance with the T568A and T568B standards. 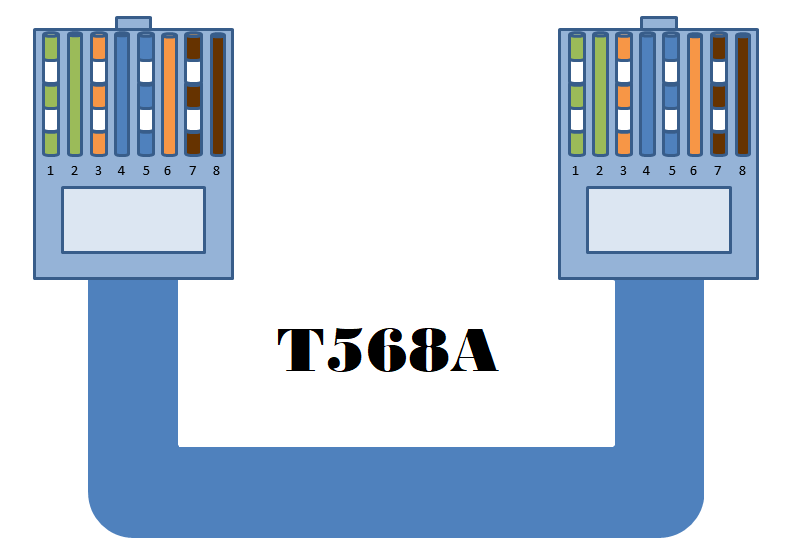 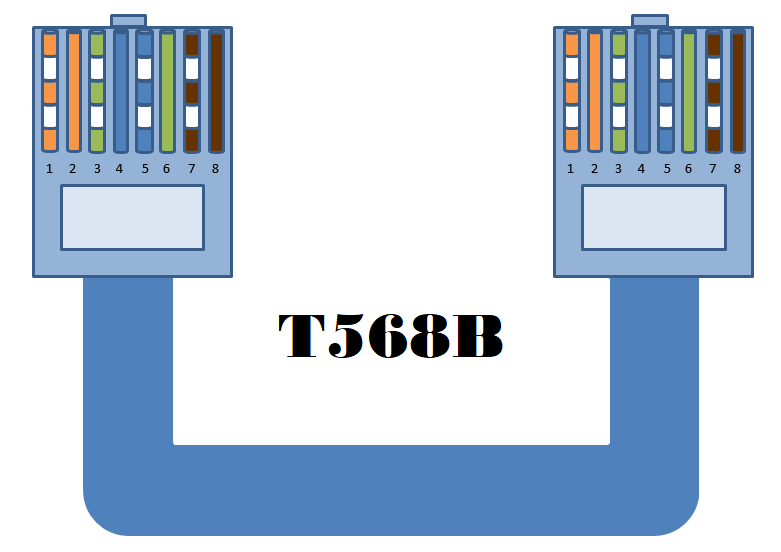 What is a crossover cable?

A crossover cable is used to connect computing devices directly. It is most often used to connect two devices of the sametype, for example, two computers (via their network interface cards ) or two switches to each other. In contrast, straight through cables are used to connect different types of devices ( a computer to a network switch). 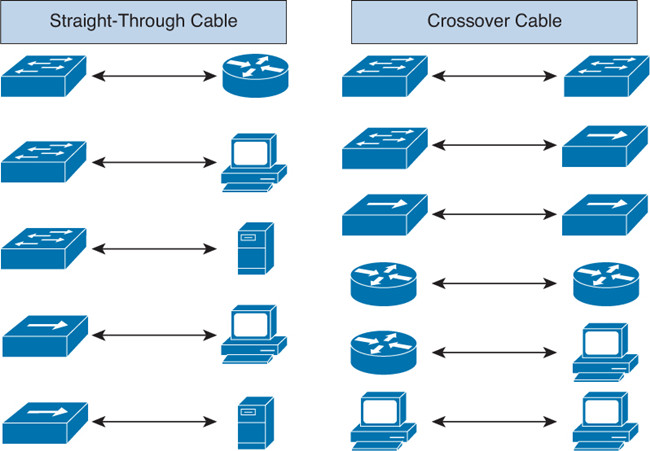 Unlike a straight through cable, different standards for the arrangement of transmission contacts are used in the cross cable: As the T568A and T568B standards differ from each other precisely in that pairs 1-2 and 3-6 are rearranged in them, to make a cross cable for the 10BASE-T and 100BASE-T networks, it is enough to compress one end of the cable according to one standard, and the other end — according to the other. 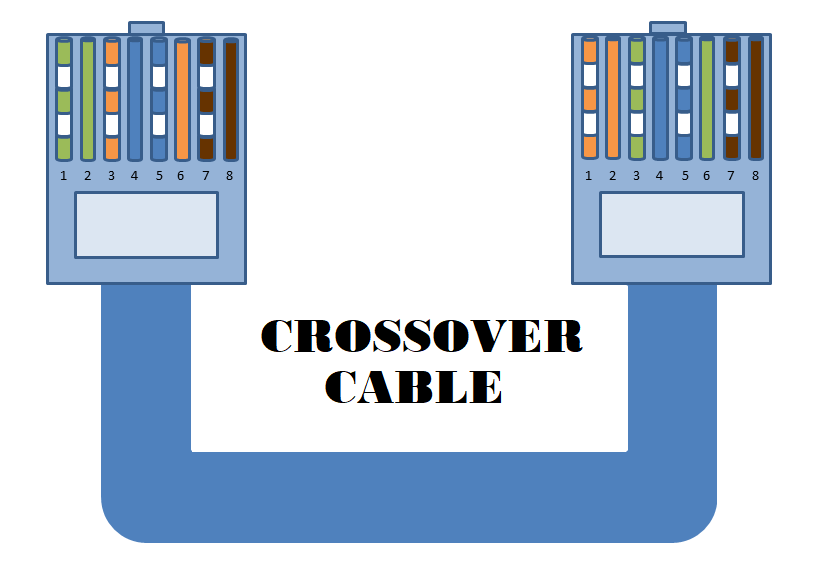 Learn more: What is the maximum length of an Ethernet cable of different categories?