Just like a computer RAM, RAM in Android is essential for multitasking especially on Android OS, Android has great multitasking feature built into it. Bigger the RAM size faster the accessing speed of your Android phone apps, games & files.
Latest Android Phones available with inbuilt RAM between  1GB to 16 GB, depending upon your Phone. If you have the latest Phone with a dual-core processor, you have 8 GB of RAM. Although 1GB of RAM might be sufficient for daily use, you must have noticed that your Android Phone is slowing down by the end of the day or especially when you launch a new app after a long time browsing web pages, it make your app super slow until you restart it again.
Read also 5 Problems Fixed that Slow Down Every Android Device Over Time

In this post, we will share 3 Top Apps To Increase the RAM Speed of Android Phones. Ideally, it is not possible as RAM is allocated within the internal memory of an Android device. Still, some third-party apps can allocate the RAM to your SD card instead of your Phone’s internal memory; thus, you can increase your RAM up to 4 GB.

RAM is the RAM of almost any device where calculations are performed through the operation of the processor. Accordingly, the more it is, the easier it is for the device to process actions. Phones using ANDROID, by default, are equipped with a considerable amount of RAM. All this is due to its only drawback – collecting various garbage, in particular JAVA. And in this article, you will learn how to make your phone faster and more convenient to use. Plus, you will add RAM to it.

There are three popular ways to increase the memory of your device:

1. Regular optimization of the device system

With the time of using a smartphone, more and more programs appear on it. Most often, each user has a massive list of games and applications that are not used. But, almost all such applications run in the background, if you have ever opened them. This significantly slows down its work. After all, when you open the browser, the system consumes RAM, which is already clogged with various background junk. Therefore, it is best to remove such things.

When buying new phones, everyone may encounter an extensive list of installed programs. Most often, you don’t use them. But, the most interesting thing is that such garbage is systemic. And users are afraid to delete it. After all, you never know that something will happen.

There is no need to be afraid to delete seemingly system files. Of course, you don’t use them. But before that, decide exactly which applications from the entire list are redundant to you.

Almost every Android smartphone has a particular swap file. To unload the main RAM of the phone, you can use special software. These include “Swapit RAM.” With it, you can create extended swap files up to 2.5 GB in size.

This method is perfect for devices with so much built-in RAM (up to 1 GB). Although there are fewer and fewer such smartphones, this does not negate the fact that people use them.

We would recommend you use a high-speed SD card. Preferably class 10 or above has the maximum speed of transferring files. The Memory card should have enough free space. We would recommend a 16 GB class 10 SD card or higher for increasing RAM. The android device should be Rooted. Top 3 Apps To Increase Internal Memory (RAM) of Android Phones:

Attention: Your device must have ROOT access!
Swapper for Root is a good app for your Phone. It does all the tasks itself without annoying swap partition on SD. In Swapper Configuration Settings, there are three options in it, first Active Swap on Boot, check the option. This will run the swapping every time your Android boots. Second, select the Swap File Position (file system) of your SD card, preferably choose EXT partition there. Third, allocate the size of the Swap File Dimension. Choose 256 MB or 512 MB depending upon your need. 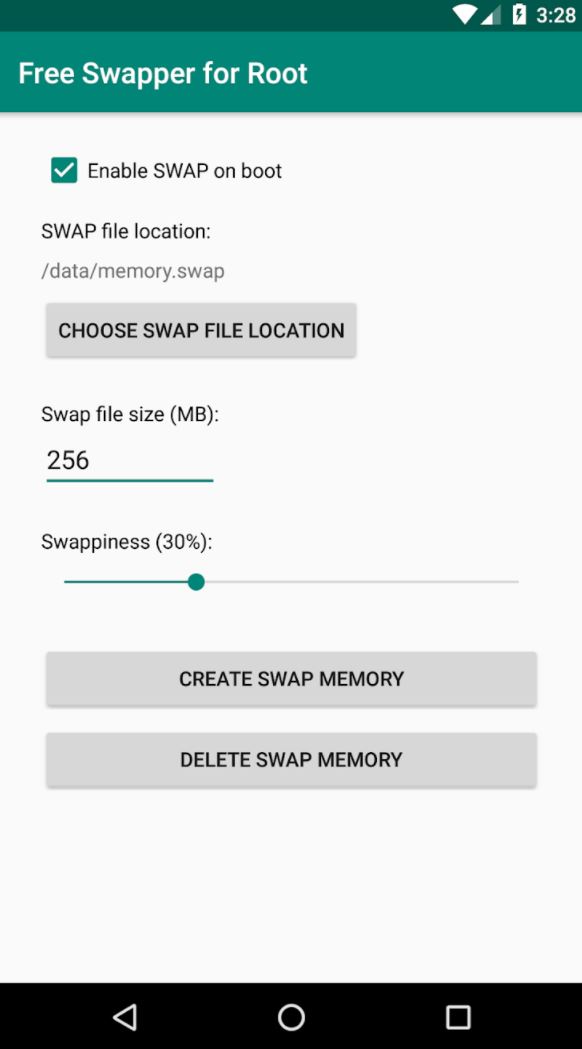 The best part about this app is creating, adding, and managing Swap memory files without swap partition on SD. 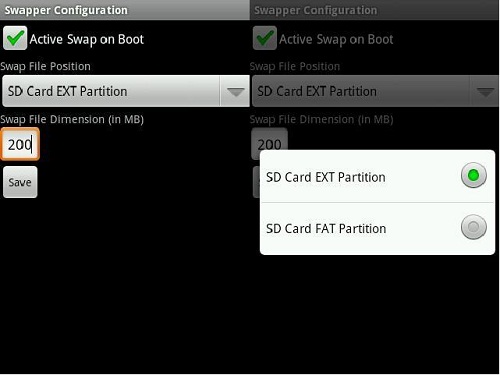 It runs on Android 1.6 and above. Need Root and kernel swap support.NO Need swap partition on SD! This program does not partition the SD card.

It’s a configurable widget that places on top of any app and one-click to RAM boost. RAM Booster is designed to overcome these issues by selectively kill less important apps running in the background but consuming considerable device memory.
Smart RAM Booster works with 4 Boost Levels: 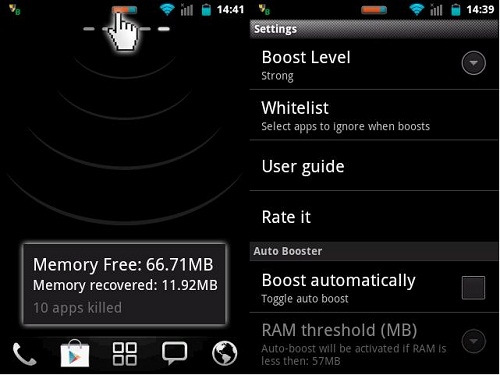 XBooster ROOT is another free app to increase RAM size & speed, indirectly boosts your device’s performance. There are three profiles to boost your device: Gaming Mode, Multitasking Mode, and Quick Boost.
Gaming Mode: This mode is best for game lovers. It boosts your device and makes more free RAM available to play heavy HD games smoothly. Start playing HD games on your device, first enable Gaming mode from this app, and start playing your games without lag. It is normal if you notice some apps Force Closes unexpectedly, enable if you like to play games.
Multitasking Mode: In multitasking mode, you’ll get an optimum amount of free RAM, so you can quickly switch among several apps. This mode is suitable for those who love to try and have installed several apps on their device. 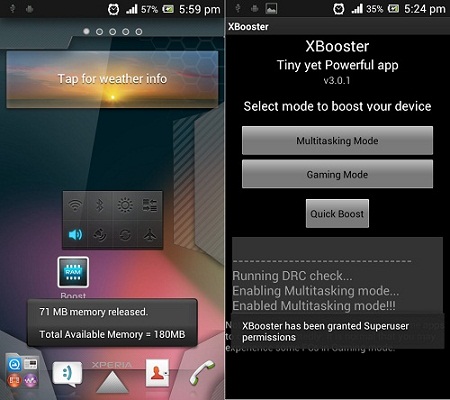 Ad-version.DRC (Dynamic RAM calculation) check algorithm to boost device performance to the best possible.Unlike ordinary task managers that always run in background, XBooster does not leave any running activity of its own, so saves more free RAM.Intelligently changes minfree values according to device’s hardware. Homescreen widget to kill useless background apps at anytime.

That’s all from our compilation of Best 3 Apps For Increasing RAM Speed, we would recommend you to use Smart RAM Booster, it has many features with very light app size, do give all three of them a try, that might be possible you like other app which we like least. Tell us if we missed any great app in our list, we’ll add it if we like your app.