Why HDD and SDD of Large Volumes Became More Expensive 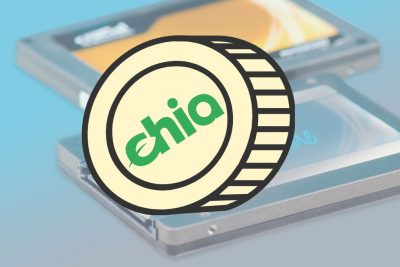 Many people may have noticed that the shortage of video cards has been added to the rise in the price of magnetic and solid-state drives. The reason is similar — cryptocurrency mining. But the culprit was not Bitcoin or Ethereum, but the Chiacoin cryptocurrency. What it is and why it can be extracted on HDD and SSD-we tell you in detail.

What is Chia and what are its features

The Chia cryptocurrency appeared back in 2017. Bram Cohen (the very creator of BitTorrent) presented the coin as a more eco-friendly and truly decentralized analogue of Bitcoin. The problem is that for profitable bitcoin mining, it is now best to use specialized computing devices — ASICs, since the complexity of calculations is already too high for video cards. Only large companies can afford ASIC in large quantities. This is not to mention the fact that the power consumption of one ASIC reaches up to 3500 watts!

In terms of size, the latest ASIC models (Antminer s19 Pro) can be compared with a small system unit. They produce a huge amount of heat, which requires adequate cooling. 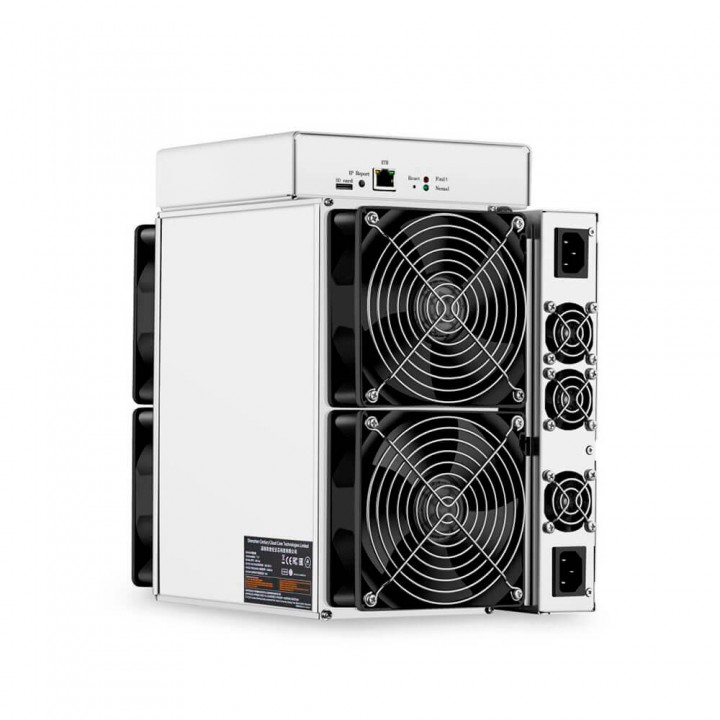 The solution to this issue, according to Bram Cohen, will be Chia, which, unlike Bitcoin or Ethereum, is mined using storage devices. The benefits are obvious — HDD and SSD are much smaller in size, consume an average of up to 30 watts, practically do not heat up and it is much easier to buy them in comparison with video cards and ASICs. That’s just the last advantage has become purely conditional, because it is becoming increasingly difficult to get large-volume drives.

Now you know why everyone is buying HDD and SSD. But to understand why the maximum volume drives have suffered the most, you need to understand the principle of Chiacoin mining.

Speaking about cryptocurrencies, it is worth touching on such a thing as the consensus algorithm. Simply put — this is a rule that determines which decision among all miners to take for the truth.

Bitcoin and Ethereum use the Proof-of-Work algorithm. In a clear language, the more computational work your machine does, the higher the probability of getting a reward for a block. High performance — a greater chance to earn.

But as practice has shown, large computing power is expensive and energy-consuming. The complexity of hash function calculations is growing, which forces manufacturers to create more and more expensive ASICs. This is also reflected in the holders of cryptocurrency — they have to pay an increasing commission for fast transfers.

A partial solution to this problem is the Proof of Stake (PoS) algorithm — proof of ownership of a stake. The more coins you keep in your wallet, the higher the chance of getting a reward. In essence, PoS is similar to a regular deposit in a bank. As such, there is no mining, the participants are responsible only for the validation of blocks, so there is no need for powerful equipment. 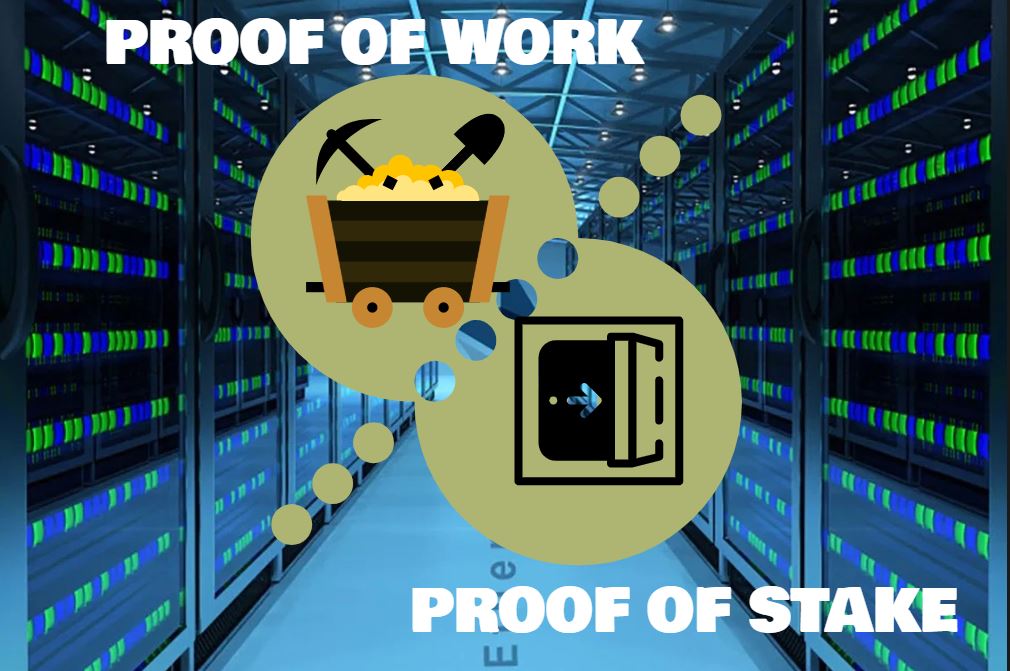 Bitcoin is not even going to switch to PoS, and the announcement of Ethereum 2.0 with the PoS algorithm has been repeatedly postponed. The Chia cryptocurrency, unlike the two algorithms described above, uses Proof of Space (proof of space) together with Proof of Time.

Users ” sow “the free space of their drives with special blocks of cryptographic numbers — plot. The size of each plot depends on the complexity of the network itself. For example, with a complexity of k=32 (at the beginning of June), the size of the plot is 101.4 GiB or 109 GB. Accordingly, to accommodate nine plots, you already need a disk of at least 1 TB.

But that’s not all — it takes time and free space to form a plot. Chia creates a temporary file, in which information is actively overwritten during the creation of the plot. For example, for one plot, a 2.2 TB volume is overwritten in a temporary file. As a result, the plotting process consumes the HDD resource very quickly, not to mention SSD drives.

As soon as at least one plot is formed on the disks, you can start mining. The network forms a task and starts looking for a key that can be suitable for solving in the plots on the miners ‘ disks. As a result, not mathematical calculations that require a powerful video card or ASIC are performed, but read/write operations. 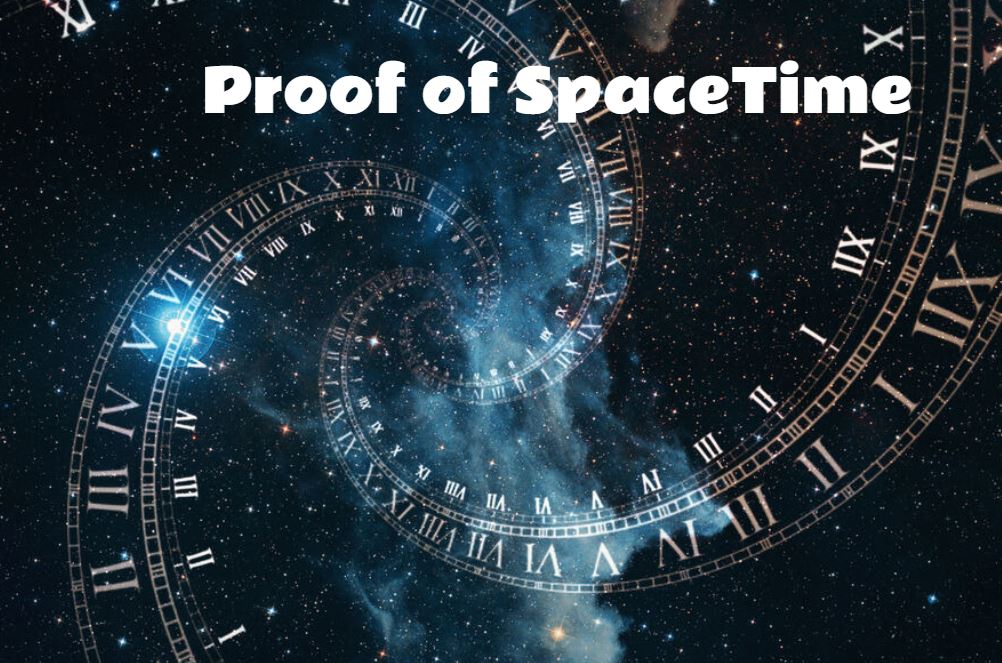 Imagine that a disk is a bucket with different keys. Each new task is a lock. You need to pick up the right key from the basket and open the lock. The one who does it first gets a reward. It is logical that the more keys you have at your disposal, the higher the chance that you will have the right one.

In this regard, the volume of available space plays a crucial role in the production of Chia, on which dozens and even hundreds of plots with potentially correct keys can be “sown”. Miners are not interested in disks with volumes less than 1 TB — a maximum of terabytes is in priority with the same occupied space.

That is why 2, 4 and 8 TB HDDs are actively disappearing from stores. Most SSDs, due to their small resource, are less suitable for mining Chia, but they are bought up as storage for the formation of temporary files. The faster the plot is formed — the sooner the farm will begin to make a profit, and here it is the high recording speed that decides. This was partially reflected on motherboards with two connectors for M. 2 SSD.

The first thing that catches the eye of most users is the price. At the beginning of June, one Chia coin is trading around $ 300 per piece. This is higher than most altcoins. Many people believe that this is very easy money. 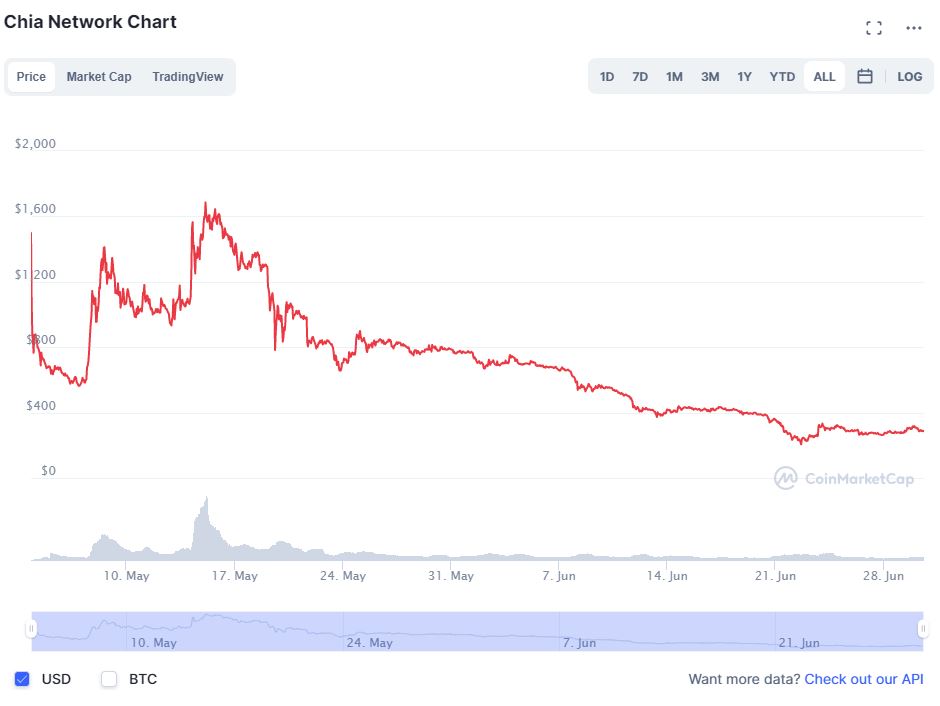 Secondly, the entry threshold is low at first glance. Before the increase in disk prices, investments could be minimal, and for the rest of the components, the requirements are even more modest-from 4 GB of RAM and a relatively new quad-core processor. Agree, this does not compare with the prices of video cards or ASICs. However, there is one catch here. All this is relevant for farming, but before that, plots must be formed. And this puts a huge load on the processor and requires an impressive amount of RAM.

4 cores and 4 GB of RAM are enough to form one plot. However, for maximum benefit and the earliest possible start of mining, it is necessary to do parallel plotting. For example, for simultaneous plotting of 12 sections, a processor of at least Ryzen 7 with 8 cores and 32-64 GB of RAM is required. On a weak system, parallel plotting will last much longer.

It is almost impossible to predict what awaits Chiacoin next. The cryptocurrency market is volatile, and manufacturers are trying to increase production volumes to cover the demand for storage devices.

There are also a number of potential problems. Despite the declared environmental friendliness of mining, Chia “kills” disks with incredible speed. For example, according to some users, an SSD with a capacity of 512 GB becomes unusable after 50-60 days. Server SSDs are much more reliable in this regard, but their price is much higher.

Some manufacturers have already presented solutions exclusively for miners. For example, Sabrent announced an SSD with an increased resource specifically for Chia. 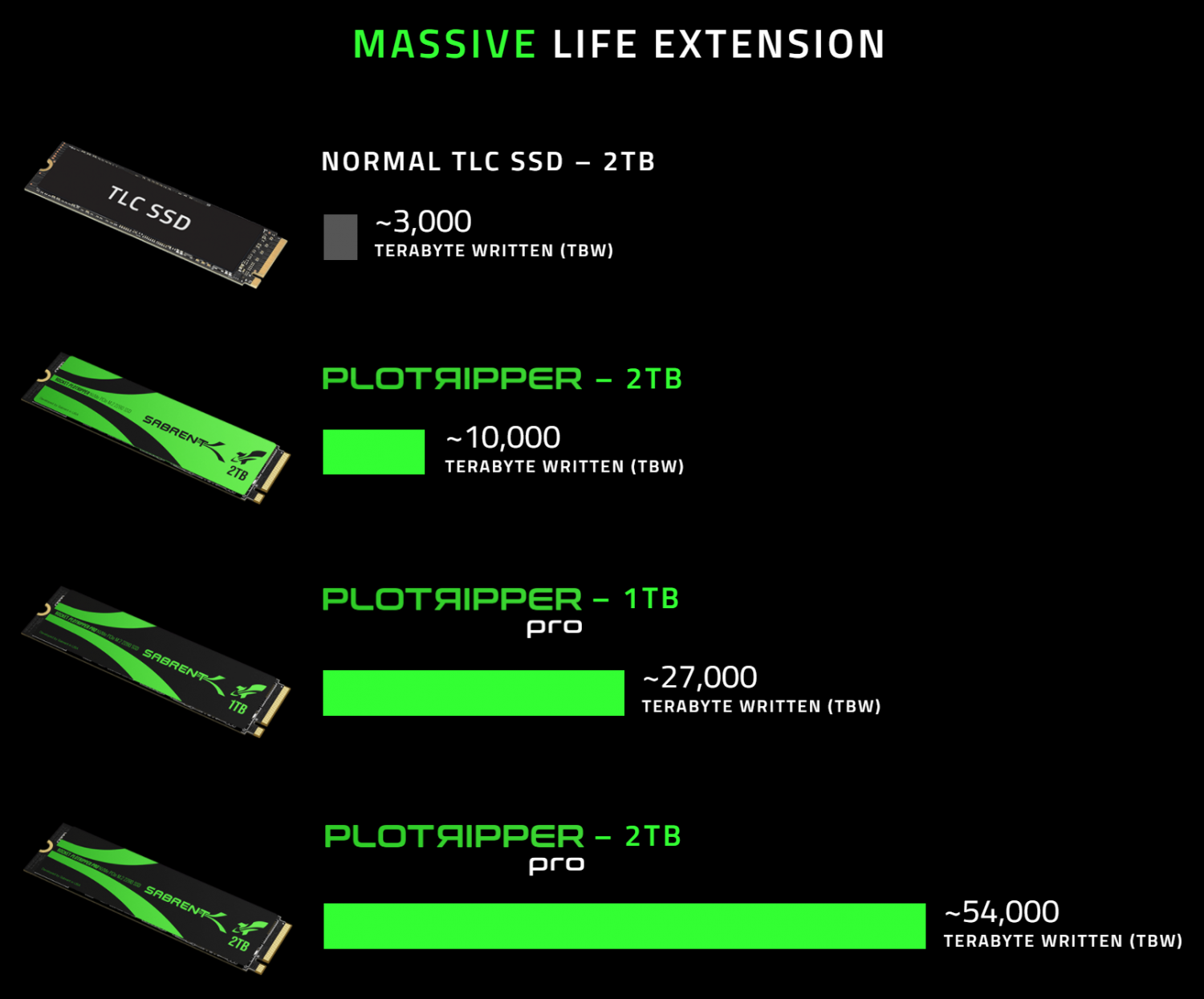 Many users are afraid of the effect of “Internet compression”. The problem is that the rise in price of storage devices will force some companies to reduce the amount of stored information. Potentially, this can lead to the fact that old versions of programs, drivers and other relatively outdated information will disappear from the network. It will become too expensive to store it.

How much can you earn on Chia mining

It will not be difficult to calculate your profit, the Chia profitability calculator was created specifically for this. For example, you have several HDDs with a capacity of 24 TB. Let’s translate this indicator into TiB, which is used in the calculator. We will get 21.82 Tib or the ability to sow 221 plots. 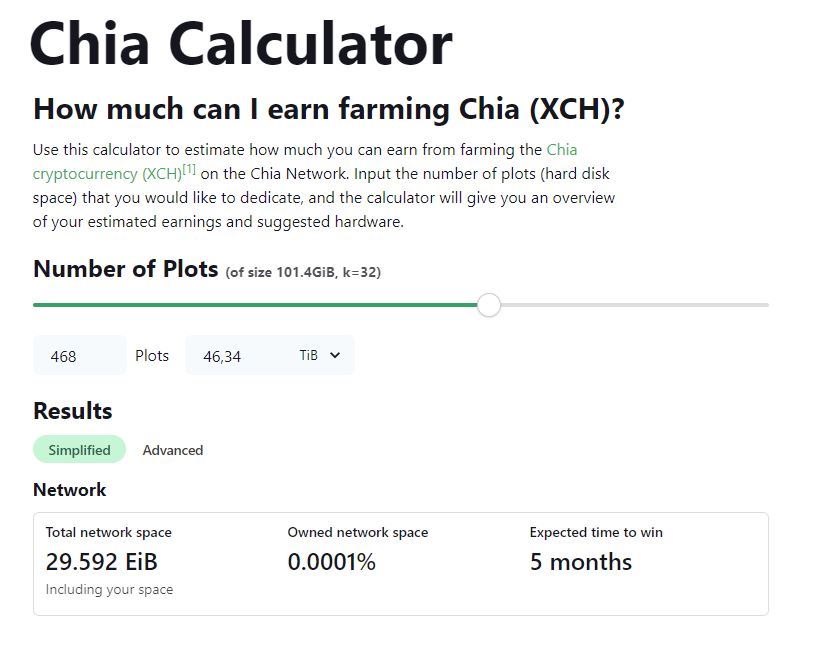 Taking into account the network volume at the beginning of June at 13,822 EiB, your chance of getting one coin per month will be only 19 %. Thus, the first Chiacoin on the wallet may appear only after 5 months.

Do not forget that all this time the network volume will only increase, respectively, the chance to earn a coin will decrease.
And this is not to mention the possible fluctuations in the exchange rate. Chia Network is growing by leaps and bounds. If we estimate the changes at the end of May, then every two days the network increases by 2000 PiB, which in terms of 2,251,799 TB!

The main question is whether the manufacturers of storage devices will be able to produce new products faster than the miners will “kill” it. If so, then we are waiting for a gradual decrease in prices. Otherwise, the deficit will not disappear anywhere, since the Chia mining process itself always requires new drives to replace the old ones.