There are many reasons that the “NTLDR is missing” error may present itself, with the first listing being the most common:
NTLDR Errors Apply To:
This issue applies to the Windows XP operating system, including Windows XP Professional and Windows XP Home Edition. 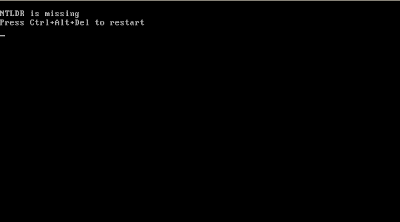 The NTLDR is missing error displays for very short time after the computer is first started, immediately after the Power On Self Test (POST) is complete. Windows XP only initially begun to load when the NTLDR error message appears.
Causes of NTLDR Errors:
There could be number of possible causes for NTLDR errors, including the most common “NTLDR is missing” error message.
First the most common reason for this error is when your PC is trying to boot from a hard drive or flash drive that is not properly configured to be booted from; in other words, it’s trying to boot from a non-bootable source. This also would apply to media on an optical drive or floppy drive that you’re trying to boot from.

How to Fixe NTLDR Errors:
1. Restart the PC. The NTLDR error message could be a fluke.

2. Check your floppy and optical (CD/DVD) drives for media and disconnect any external drives. Most of the times, the “NTLDR is Missing” error will appear if your PC is trying to boot to a non-bootable floppy disk, CD/DVD, or external hard drive or flash drive.

Note: If you find that this is the cause of your problem and it’s happening a lot, you might want to consider changing the boot order in BIOS so the hard drive with Windows installed should be listed first.

3. Then check the hard drive and other drive settings in BIOS and ensure they are correct. The BIOS configuration tells the computer how to use a drive so incorrect settings can cause problems, including NTLDR errors.

There is usually an Auto setting for hard drive and optical drive configurations in BIOS which is usually a safe bet if you’re not sure what to do.

4. Restore the NTLDR and ntdetect.com files from the Windows XP CD. Restoring these two important system files from the original Windows XP CD may fix.
5. Replace or repair the boot.ini file. This will prevent the NTLDR error if the cause of the problem is a boot.ini file that is not configured properly for your Windows XP installation.
6. Then try to write a new partition boot sector to the Windows XP system partition. If the partition boot sector has become corrupt or isn’t properly configured, you may receive the “NTLDR is Missing” error.
7. Then try to repair the Windows XP master boot record. NTLDR error messages may also appear if the master boot record is corrupt.
8. Reseat all internal data and power cables. NTLDR error messages could be caused by loose or malfunctioning IDE data cables, only if you think that could be faulty.
9. Now update your motherboard’s BIOS. Sometimes, an outdated BIOS version can cause the “NTLDR is Missing” error.
10. Now perform a repair installation of Windows XP. This type of installation should replace any missing or corrupt files. Continue troubleshooting if this does not resolve the problem.
11. Eventually perform a clean installation of Windows XP. While this will almost certainly resolve any NTLDR errors, it is a time consuming process due to the fact that all of your data must be backed up and then later restored. This type of installation will completely remove Windows XP from your PC and install it again from scratch.

Important: If you can’t access to your files to back them up, understand that you will lose them all if you continue with a clean installation of Windows XP.

12. Then replace the hard drive and then perform a new installation of Windows XP. If all else has failed, including the clean installation from the last step, you’re probably facing a hardware issue with your hard disk drive.
Thanks & Blessing be on you all!