Android is the mobile operating system has over 1 billion smartphones and tablets at this point in time. Since these devices make our lives so sweet, as you know each Android version is named after a dessert: Cupcake, Donut, Eclair, Froyo, Gingerbread, Honeycomb, Ice Cream Sandwich, and Jelly Bean. But now Android has decided to name the next version of Android after one of our favorite chocolate treats, Kitkat®!
Google officials said that the name is licenced after making a partnership with Nestlé Kitkat. Where Nestlé will also produce almost 50 millions Android robot themed kitkat bars for the promotion of latest Android version 4.4 Kitkat. 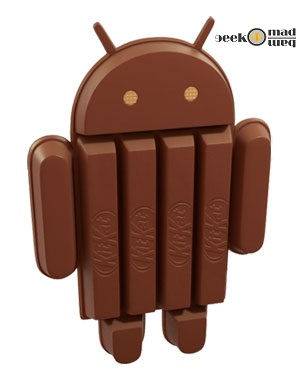 Many of us had a question that what is the new version and name of latest Google Android in 2013, While people are excited with Android 5.0 name Key Lime Pie or Lolipops rumours but Google ended every bodies speculation with the final Android 4.4 version name Kitkat.
Google and Nestlé revealed the details of Android 4.4 KitKat at the Mobile World Congress 2013 which went through in private – concealing the truth from fans about Android’s future – but it was necessary for the “greater good.”
As we all know that Google’s Android has changed the smartphone era and now it is most popular mobile operating system beating iOS, Symbian, Blackberry and Windowsphone. Since Android developers continuously made changes and the Kitkat is the eleventh major Android version.
Google says officially that “It is our goal with Android Kitkat to make an amazing Android experience available for everybody”.
Lets have a look at our running Android versions:
1. Android 1.5, Cupcake:

Right from the start, Android is an open OS that can run almost any app or widget so you can do what you want to do.

The world’s information is at your fingertips – search the web, get driving directions…or watch cat videos.

With Android Eclair you can make your home screen just how you want it. Arrange apps and widgets across multiple screens and in folders. Stunning live wallpapers respond to your touch.

In Gingerbread, new sensors make Android great for gaming – so you can touch, tap, tilt, and play away.

This Android Honeycomb is optimized for tablets, this release opens up new horizons wherever you are.

Android ICS comes of age with a new, refined design. Simple, beautiful and beyond smart.

Android Jelly Bean is the latest version from Android till now, Android Jelly Bean is fast and smooth with buttery graphics. And with more than 1 million apps on Google Play, and thousands of Android devices, you’ve got the freedom to do what you want on any device you choose.

Google says: It’s our goal with Android KitKat to make an amazing Android experience available for everybody.

News from Android 4.4 KitKat:
Google and Nestlé surprised the world with the KitKat arrangement in Mountain View, in front of Android head-quaters, Google has already made a Kitkat statue in the shape of ever known Android robot.

Google has started the promotion on Android’s website stated that: To make this release even sweeter, Kit Kat is giving you the chance to win a Nexus 7 or Google Play credit. Just look for specially branded Kit Kat candy bars featuring the Android robot in a store near you.